Services that require high availability typically use floating IPs. Floating IP address can be transferred between multiple servers allowing for failover or upgrading of production software. 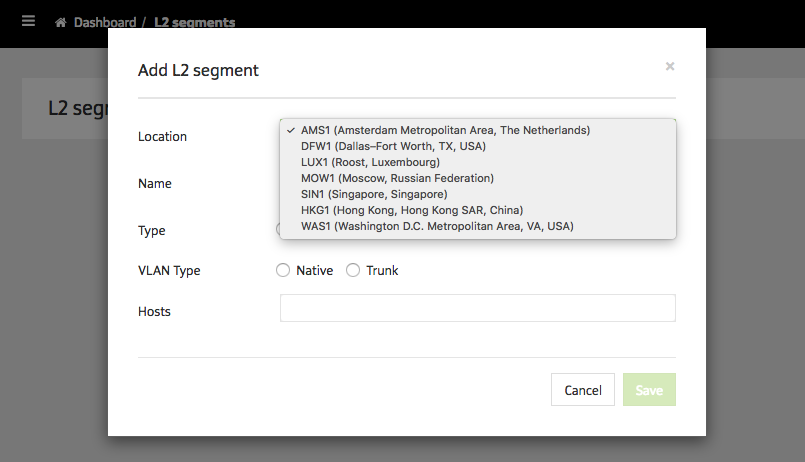 Let's say we have two dedicated servers in the DFW1 location, named "master-keepalived" and "slave-keepalived".

Now we need to create a new L2 segment in "Networks > L2 segments" section of the Customer Portal. The type of VLAN is "Native" as we only use one VLAN, and the type is "External" because we will be using public address space. Name is irrelevant, and we need to add both of our servers to the hosts subsection.

It takes 3-5 minutes for new segment to be created. Use the "Refresh" button next to the segment status to check if the status has changed from "pending" to "active".

After the segment became active, we need to add an IP alias, which will be the floating IP. Add one, click "Save".

Install and enable keepalived daemon on both servers:

In our demo configuration we have two servers: MASTER and BACKUP. The floating IP address is assigned to the MASTER in normal course of action. Responsibility of the BACKUP server is to take over the floating IP and the load from the MASTER server in case of its failure, and vice versa.

There is no need to set up the alias IP address anywhere except forkeepalivedconfiguration file. Keepalived assigns the address todesignatedinterface.

Some notes on configuration file:

Now we are ready to start keepalived on both servers:

You can see in the ifconfig output, that the floating IP is assigned to the MASTER server by default:

To test failover, start pinging the floating IP, then stop keepalived on the MASTER:

You will see short timed packet loss in the ping output, which takes place while the BACKUP server takes floating IP over:

How to protect SSH using fail2ban on Ubuntu 16.04